Annual festivals of shrines in Himeji are mostly held in October.  Generally The festival is divided into two days.  The first day is called “Yoi-Miya (宵宮)” and the second day is called “Hon-Miya (本宮) or Hiru-Miya (昼宮)”.

Yoi-Miya (Evening Festival/宵宮)
The festival starts around noon of the first day with “Neri-Dashi” (練り出し).  In the each village or region, a Yatai (屋台), which is a portable shrine, is carried around to present it to the residents.  Participants parade around their village/town with the Yatai in the afternoon, which is called “Mura-Neri (Village Parade/村練り)”.

Hiru-Miya (Day Festival/昼宮)
The main festival takes place on the second day.  The participants with Yatai leave home village/town and heads to the “Otabisho (御旅所)”, place where the sacred palanquin is lodged during a festival.  According to the tradition, when Kami (Gods of Shinto religion) go on a journey, people(Ujiko/氏子), who are people under the protection of the local tutelary deity, accompany the god(s).  When Yatai of each villages/towns are lines up, participants starts “carrying competition” on the huge public space. 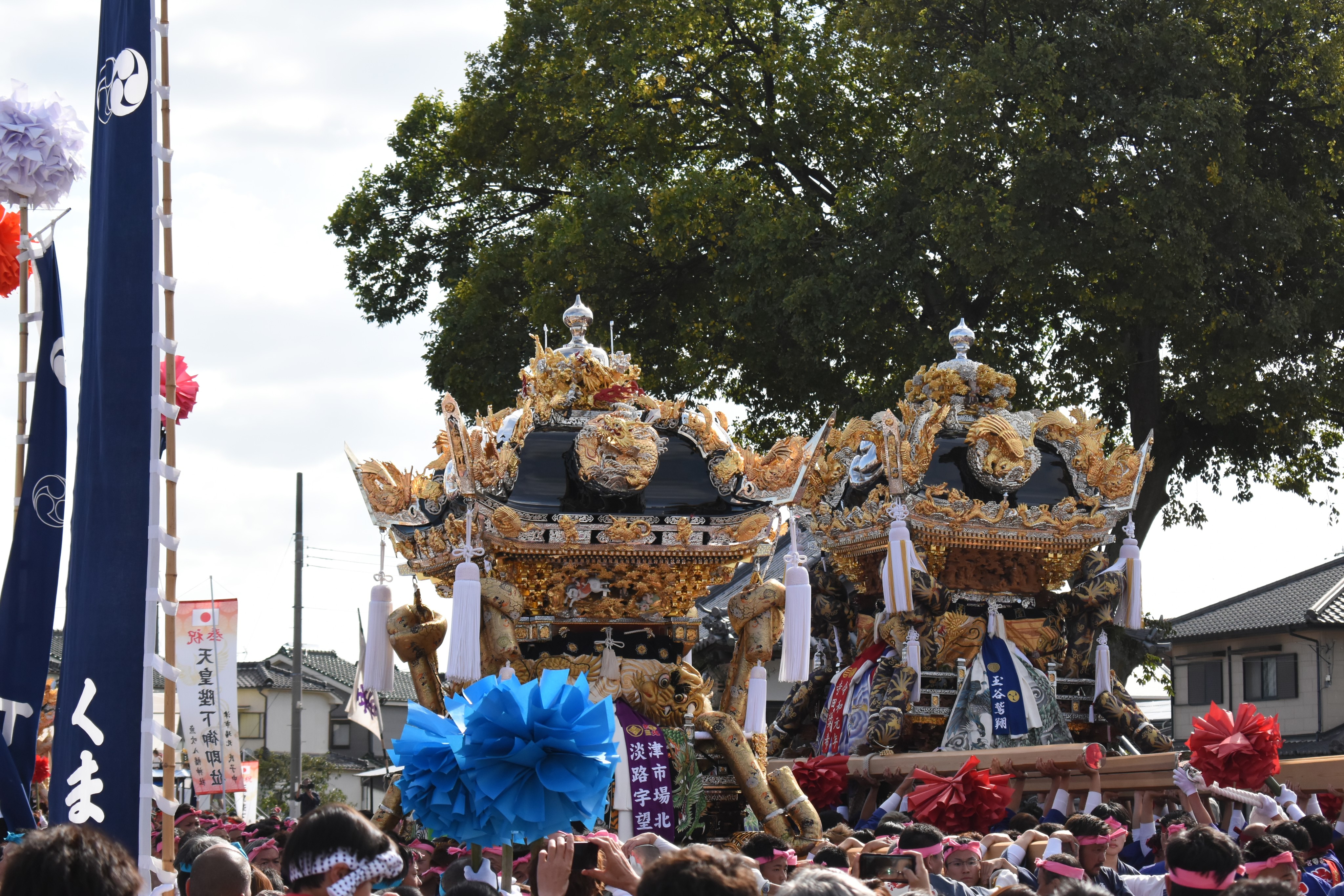 Cho-Sa (チョーサ) as Western style (西の流儀) at Usuki Hachiman Shrine
Yatai (the locals say “Yattai” instead of Yatai) which belongs to Usuki Hachman Shrine, participants perform Cho-Sa, which are lifting the Yattai over their heads.  Yattai is tossed into air by men. When carriers lift the Yattai with the shout, “Cho-Sa (チョーサ)”.  This style of lifting is commonly seen in the western and neighbouring part of Himeji such as Aboshi and Tatsuno.

Yo-I-Ya-Sa (ヨーイヤサー) as Eastern style (東の流儀) at Matsubara Hachiman Shrine
At the Matsubara Hachiman Shrine, which is famous as Nada Fighting Festival (灘のけんか祭り), two or more palanquins are banged against each other. That’s called “Neri-Awase” (練り合わせ).  When carriers lift the Yatai (the locals say Yassa instead of Yatai) with the shout, “Yo-I-Ya-Sa (ヨーイヤサー)”.  This style of lifting and banging is commonly seen in eastern part of Himeji such as Shikama (飾磨) and Shirahama (白浜). 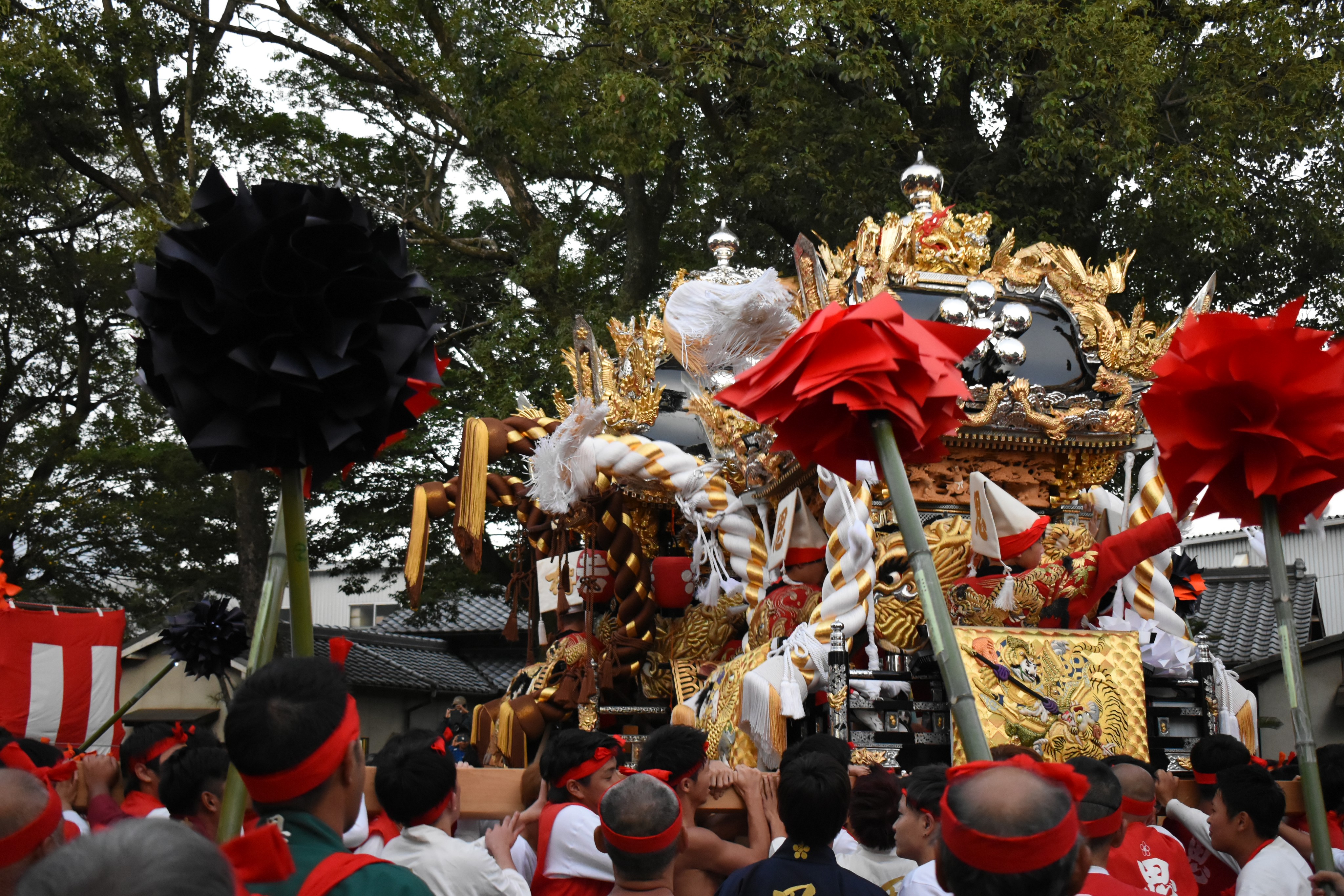 As you can see it takes a lot of manpower to lift up the float as it weights up to 2.5 tons! Teamwork and a great synchronization are necessary.

Miya-Iri (宮入)
Then, the main event of the day will start, the “Miya-Iri” (宮入). Each Yatai (屋台/portable shrine) will enter through the shrine gate to receive the blessings of the gods.

At Matsubara Shrine (松原八幡神社) and Usuki Shrine (魚吹八幡神社), the top of the Yatai had to be removed so that it would fit through the entrance gate. Some people say having to remove the top is similar to taking off your hat when entering a church, to pay respect to the god(s).

In some shrines such as Matsubara Hachiman shrine (松原八幡神社), a Shinto priest tosses purifying salt over each team and float during the ceremony.  Generally there’s a given order in which the seven floats of each village have to enter.

Lion Dance (獅子舞) at Matsubara Hachiman Shrine.
After all portable shrines have received their blessings and the “Neri-Awase” has started, there’s “Shishimai“. It’s a lion dance held in front of Shirahama Elementary scool and in front of the Shrine. In contrast to the busy working of Yatai, the lion dance is performed peacefully and gracefully with ancient Japanese court music (Gagaku, 雅楽).

Miya-De (宮出)
After Miya-Neri (宮練り) in the afternoon, participants take a break and have meal with mates or family.  Each Yatai leaves the shrine (Miya-De, 宮出) and come home in the evening.  The illuminated Yatai looks quite nice.

Traditional Matsuri Clothes
The men who participate as carriers of the floats all put on headbands (hachimaki、鉢巻). The color of the headband depends on either his role or the village they belong to.  Furthermore they are wrapped in mawashi (廻し) which is similar to fundoshi (褌) , a loincloth that sumo wrestlers usually wear.  The contestants wear Jika-tabi (地下足袋), a type of traditional Japanese boots.  Last but not least, they have a udemamori (腕守り), an arm protector, on their upper left arm.

Carriers are called “Neriko(練り子)”.  People who carry the Yatai on their shoulders.  A Yatai is carried by at least 60 people that consists of male adults traditionally. 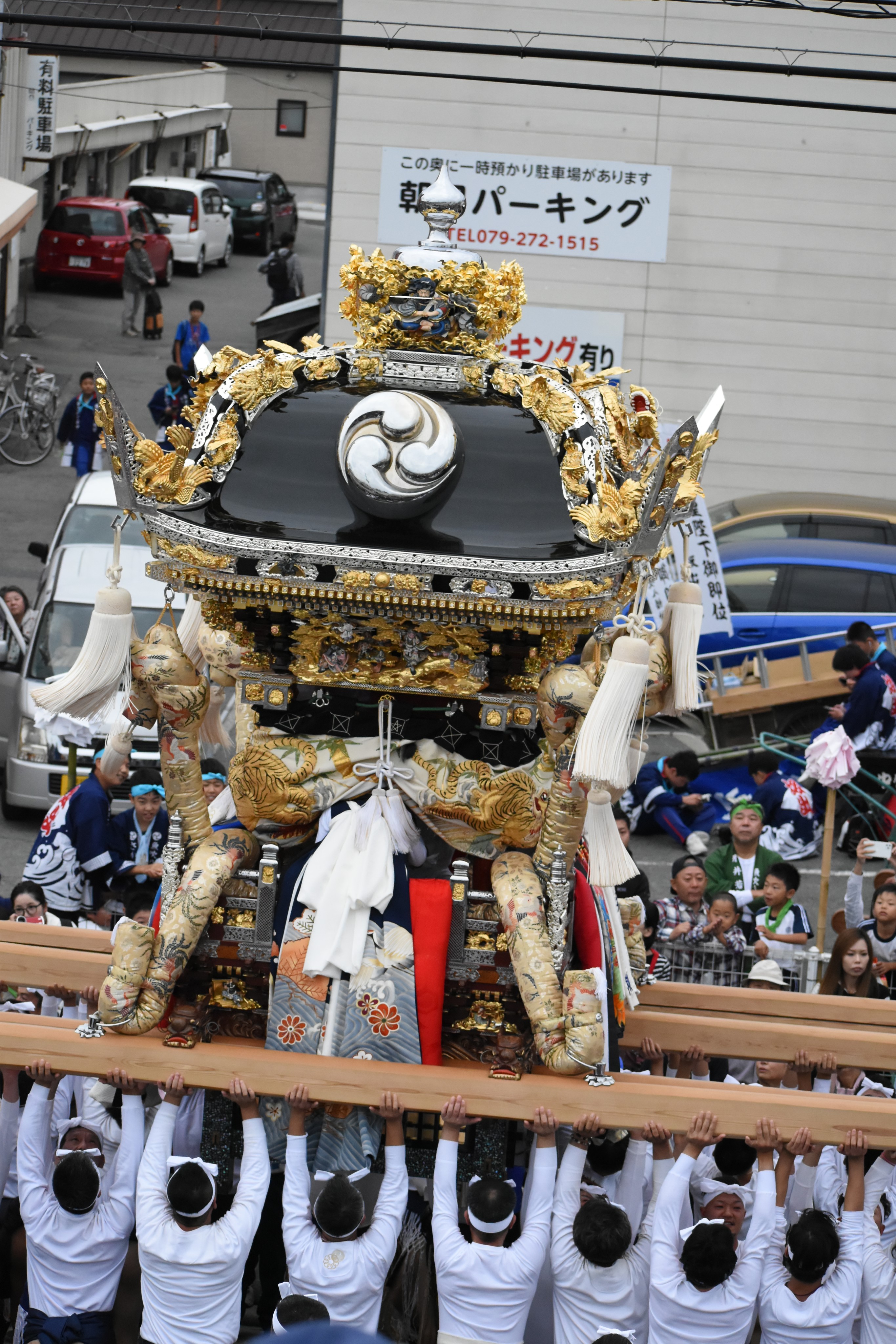 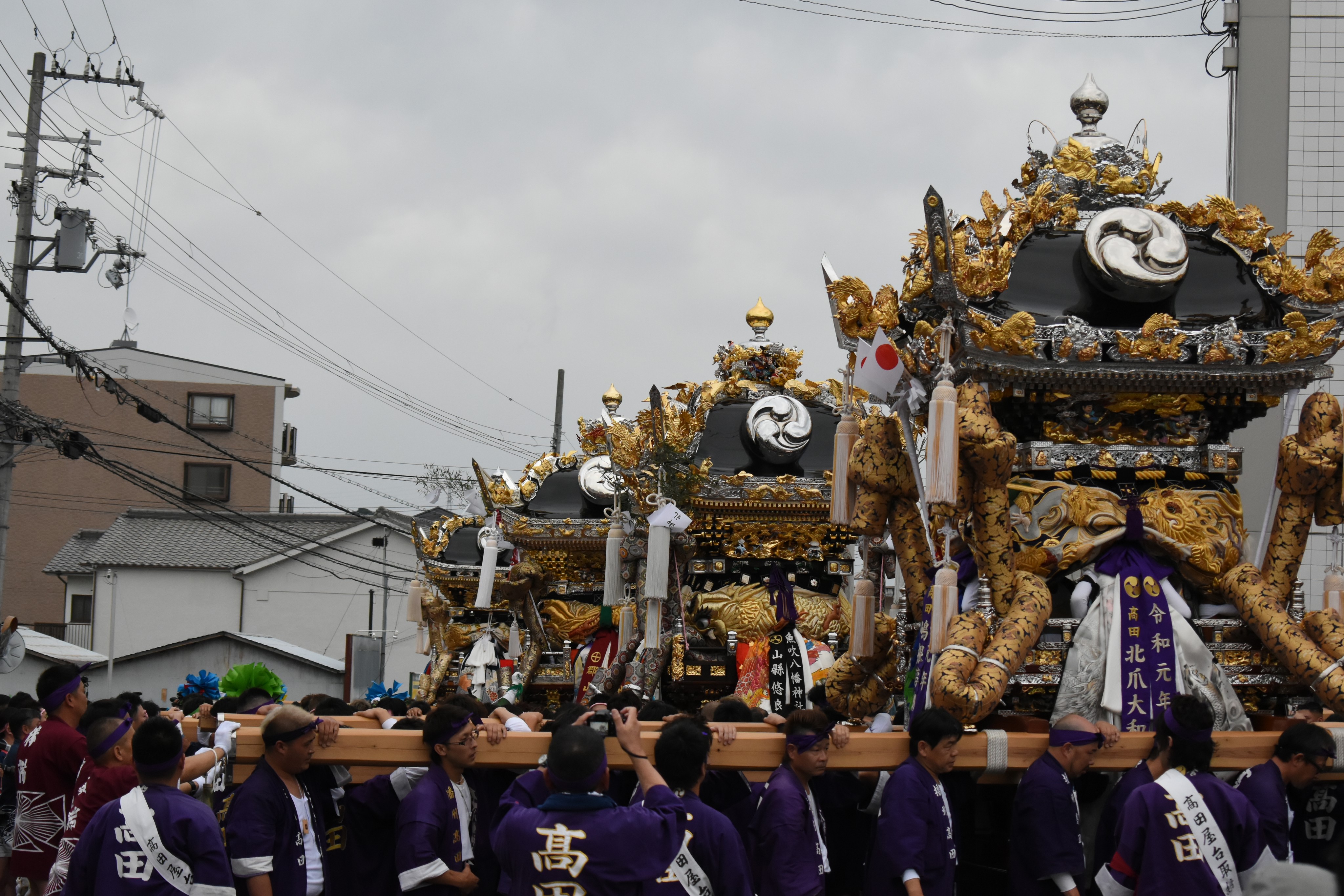 People who ride and drum inside the palanquin is called “Noriko (乗り子)”. Drumming is usually performed by four men who wear expensive kimono(Japanese traditional costume).

Beautiful Parts of Yatai
When you find a resting float, you can get closer and admire all the great details:

The yatai (屋台) have gold and silver decorations and weights from 2.0 tons to 2.5 tons. There are some rumours that one costs around 1 million USD but it’s not sured yet. They have to build a new Yatai every 15-20 years. Often you see newly built yatai (wooden without a lot of decoration) getting blessings from the shrine during the festival as well. In 1-2 years they can be used for real. They’re called Shiraki Yatai (白木屋台, untreated wood yatai).

Yatai-Mon(屋台紋): The crest on the roof of Yattai.  The crests vary in pattern and design, mostly represent its shrine’s emblem and symbolizes its region’s guarding gods. Three comma‐shaped figures in a circle (左三つ巴) is commonly seen on the Yatai which belongs to Hachiman Shrines (八幡神社).  Also dragon crests (龍紋) are very common for Yatai of Matsubara, Usuki Hachiman and Tomishima shrines.  Plum bowl (梅鉢) crests are used by Yatai of Tenmangu Shrine (天満神社).  Apart from them, you can find unique crests such as eagle (鷲), sea-bream (鯛), bottle gourd (千成り瓢箪) and Asarum caulescens (葵). 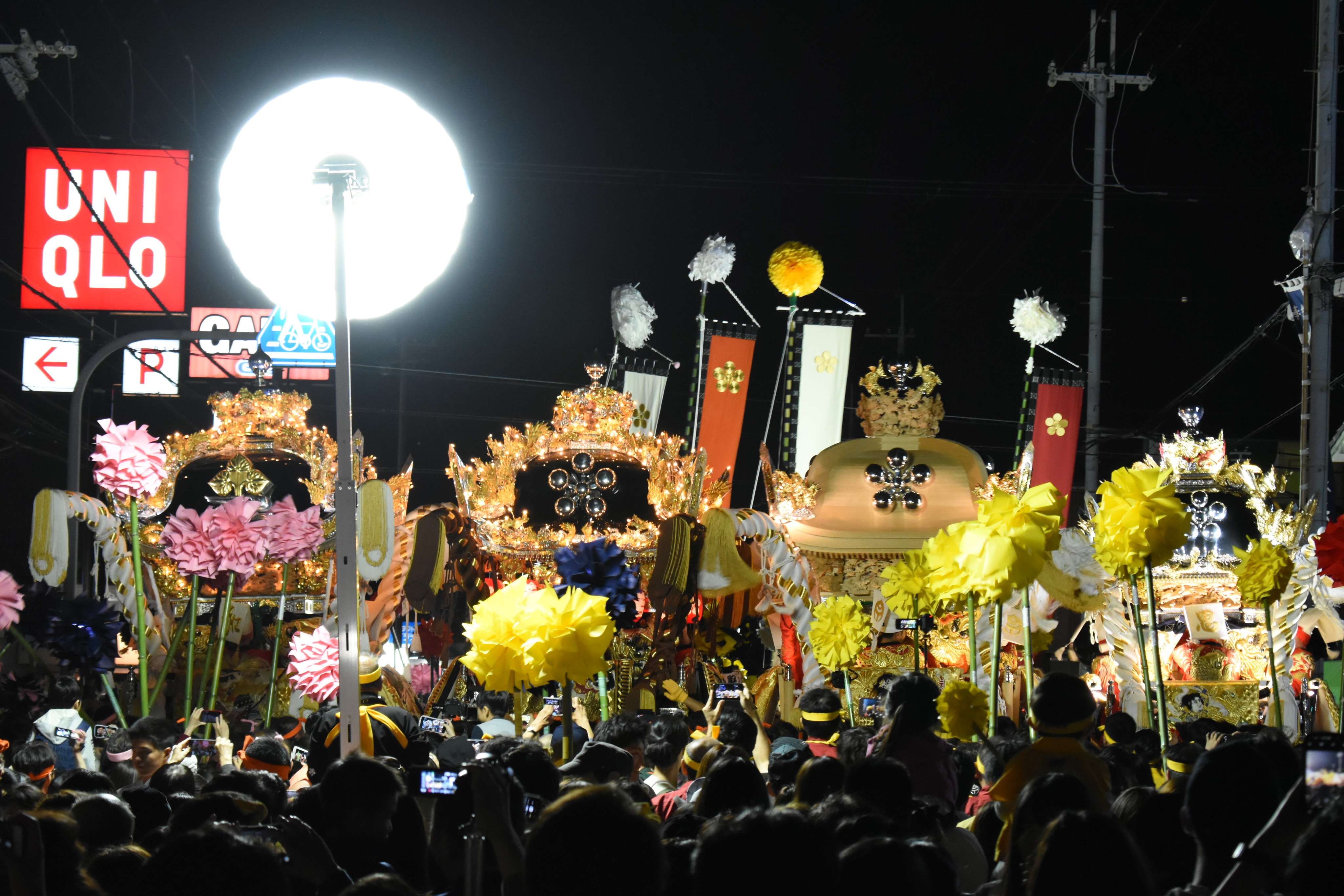 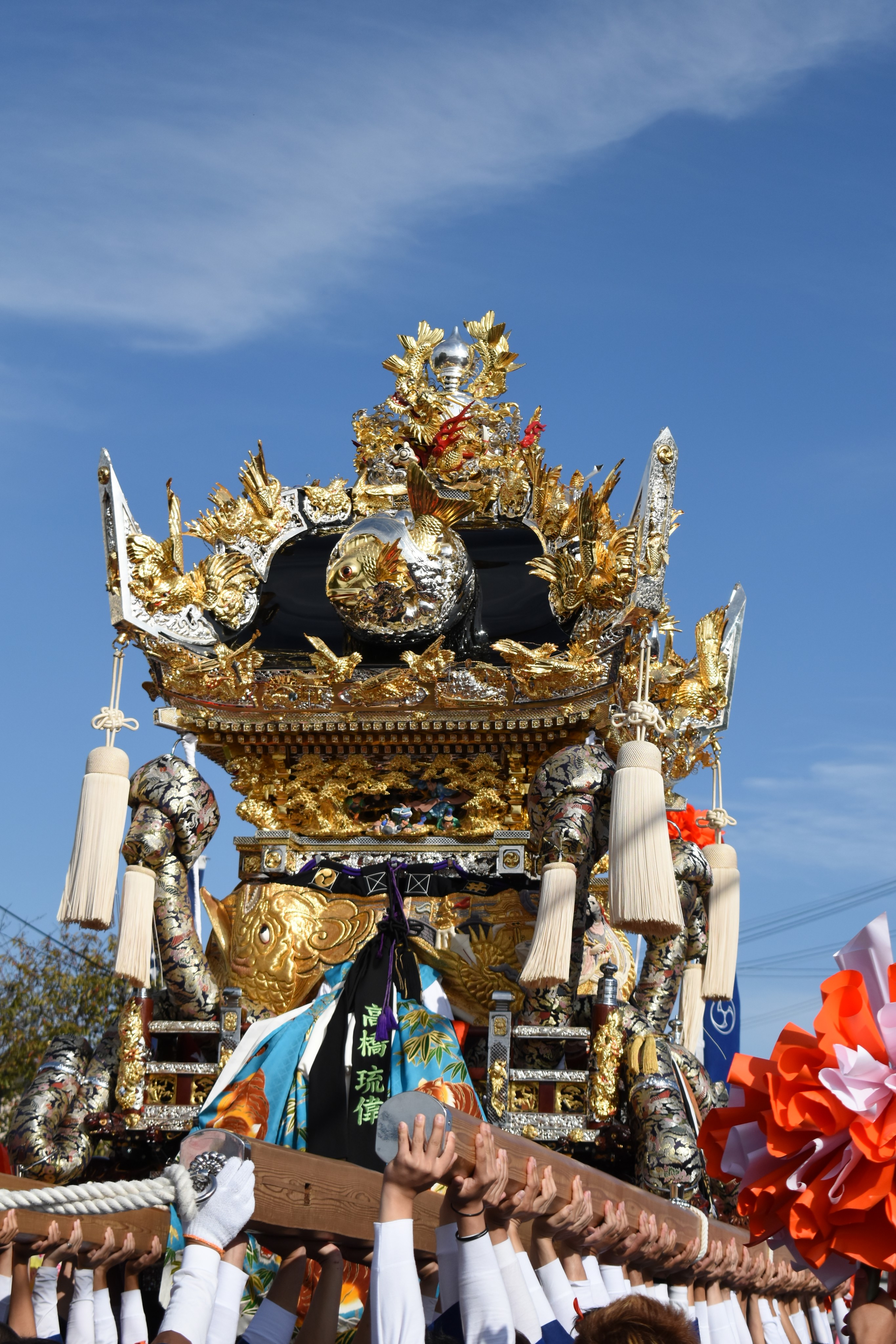 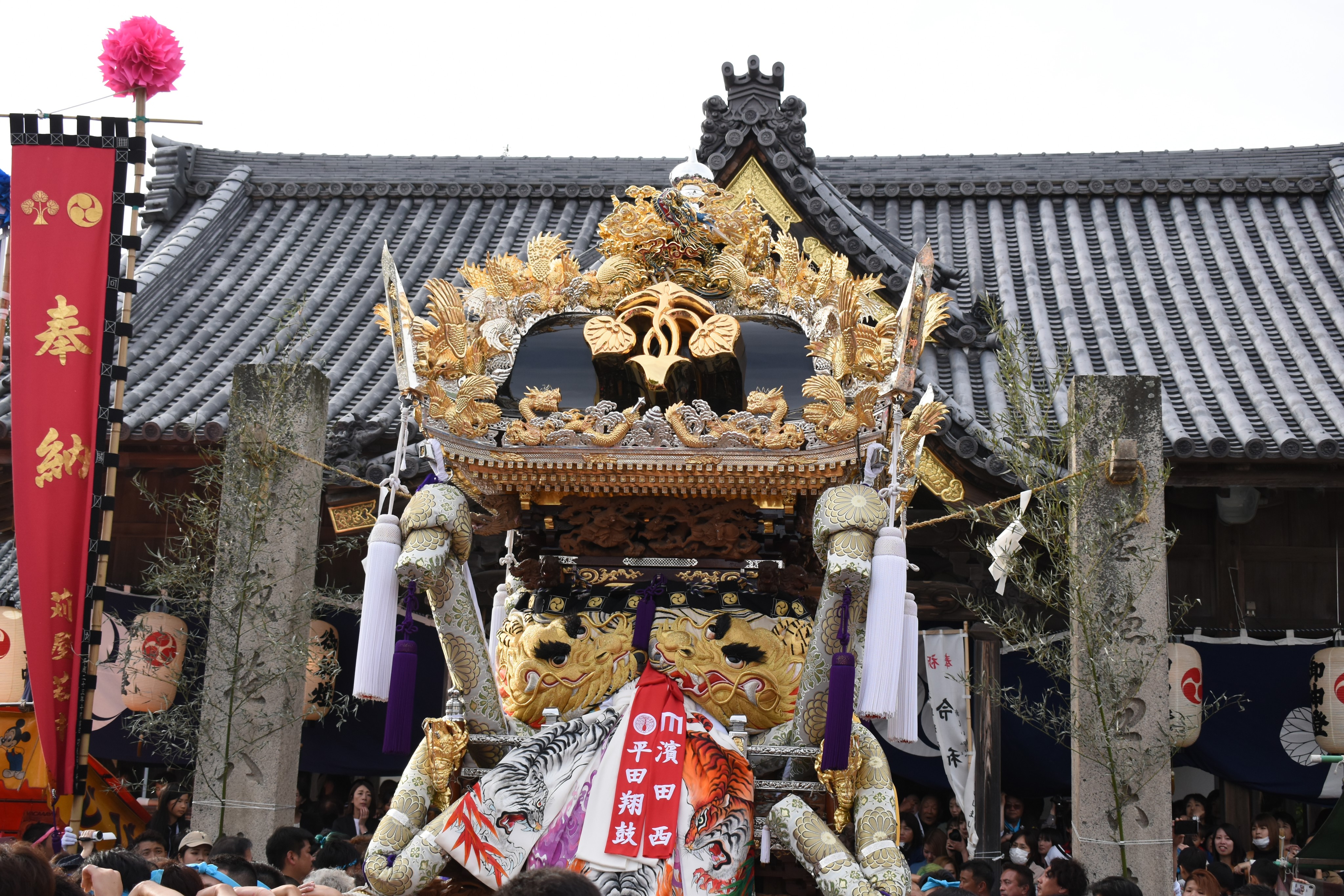 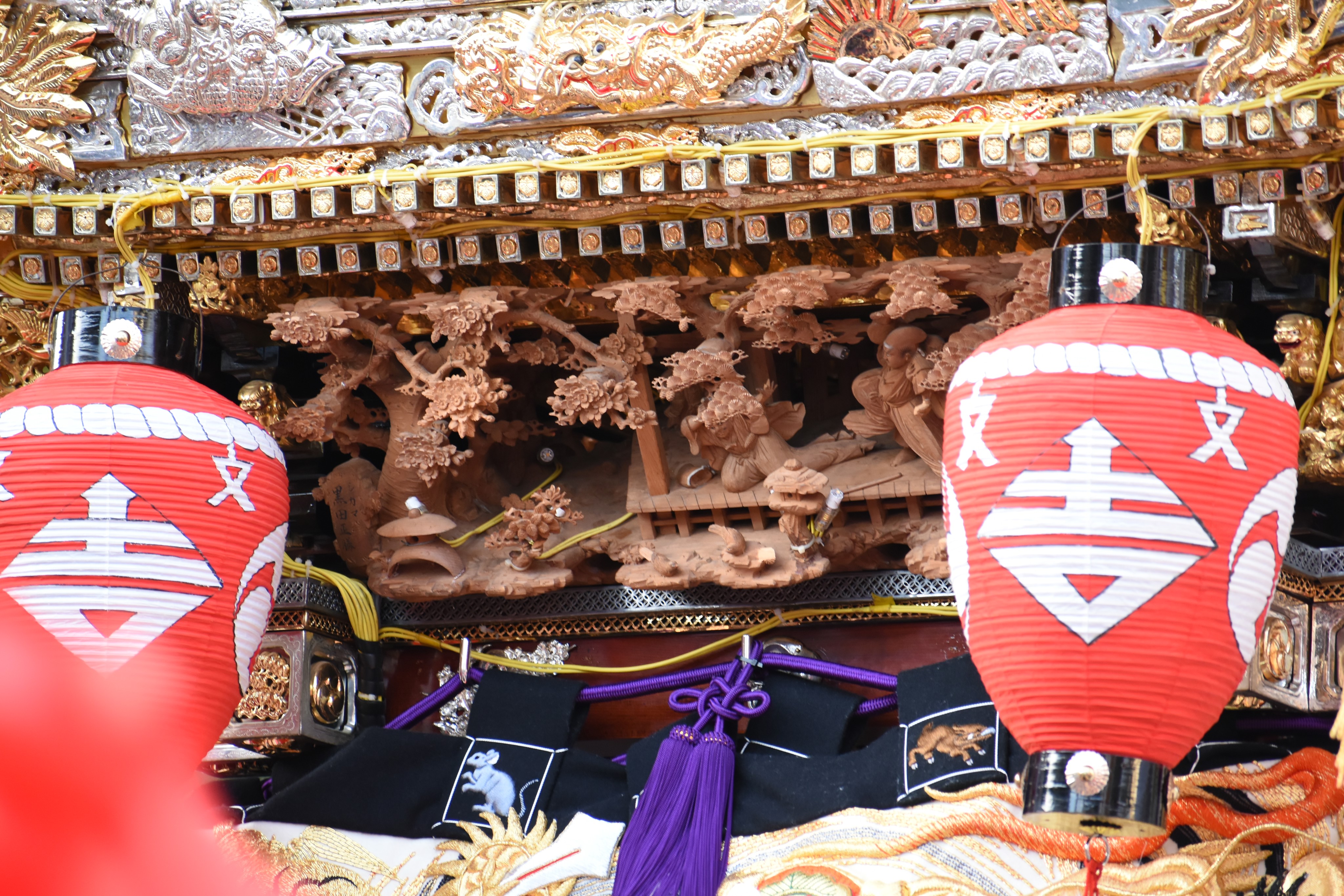 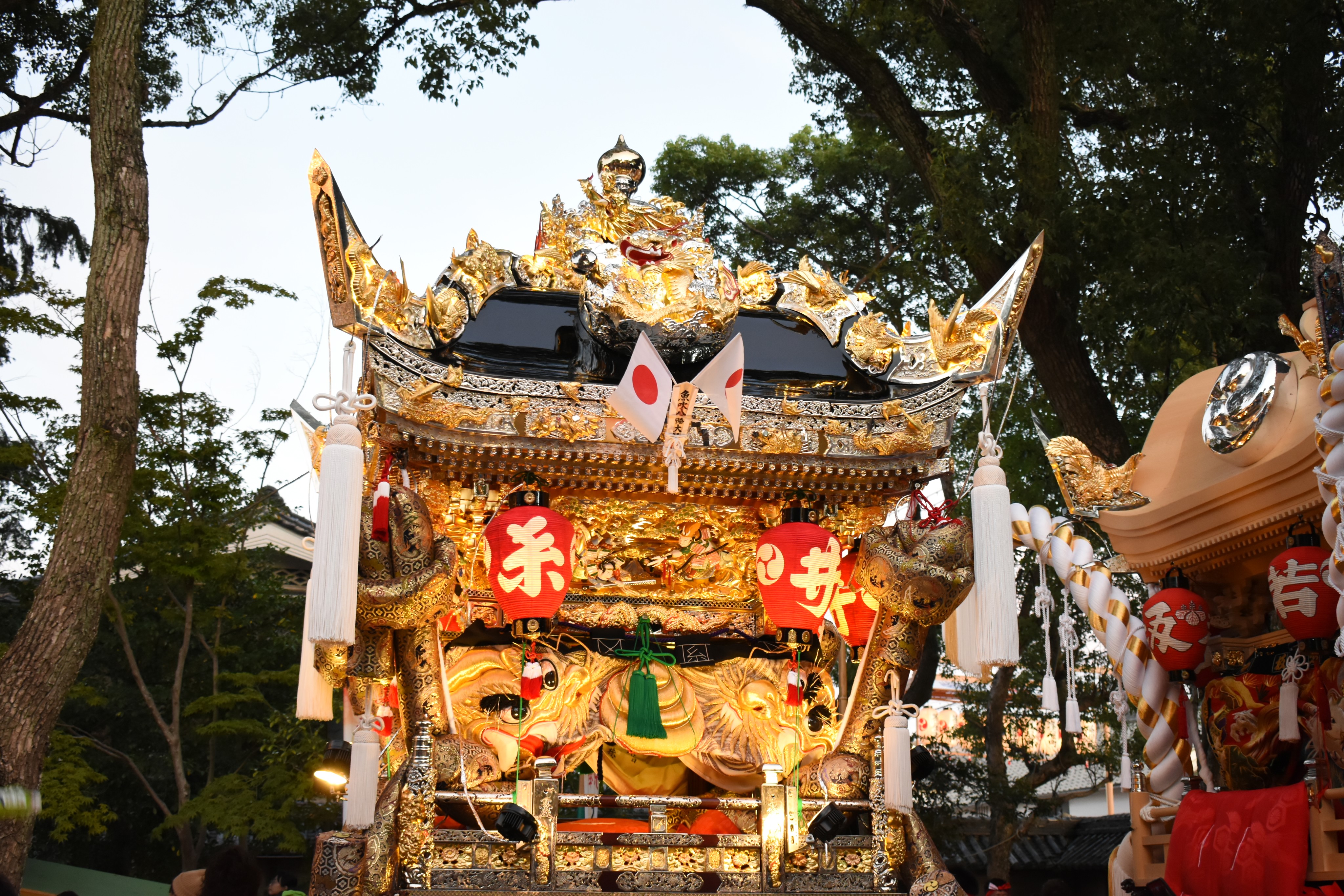 Honbou(本棒): Main wooden bar.  The main bar is usually thicker than the side one.
Wakibou(脇棒): Side wooden bar. Each yatai is decorated with beautiful wooden carvings and other valuable items. 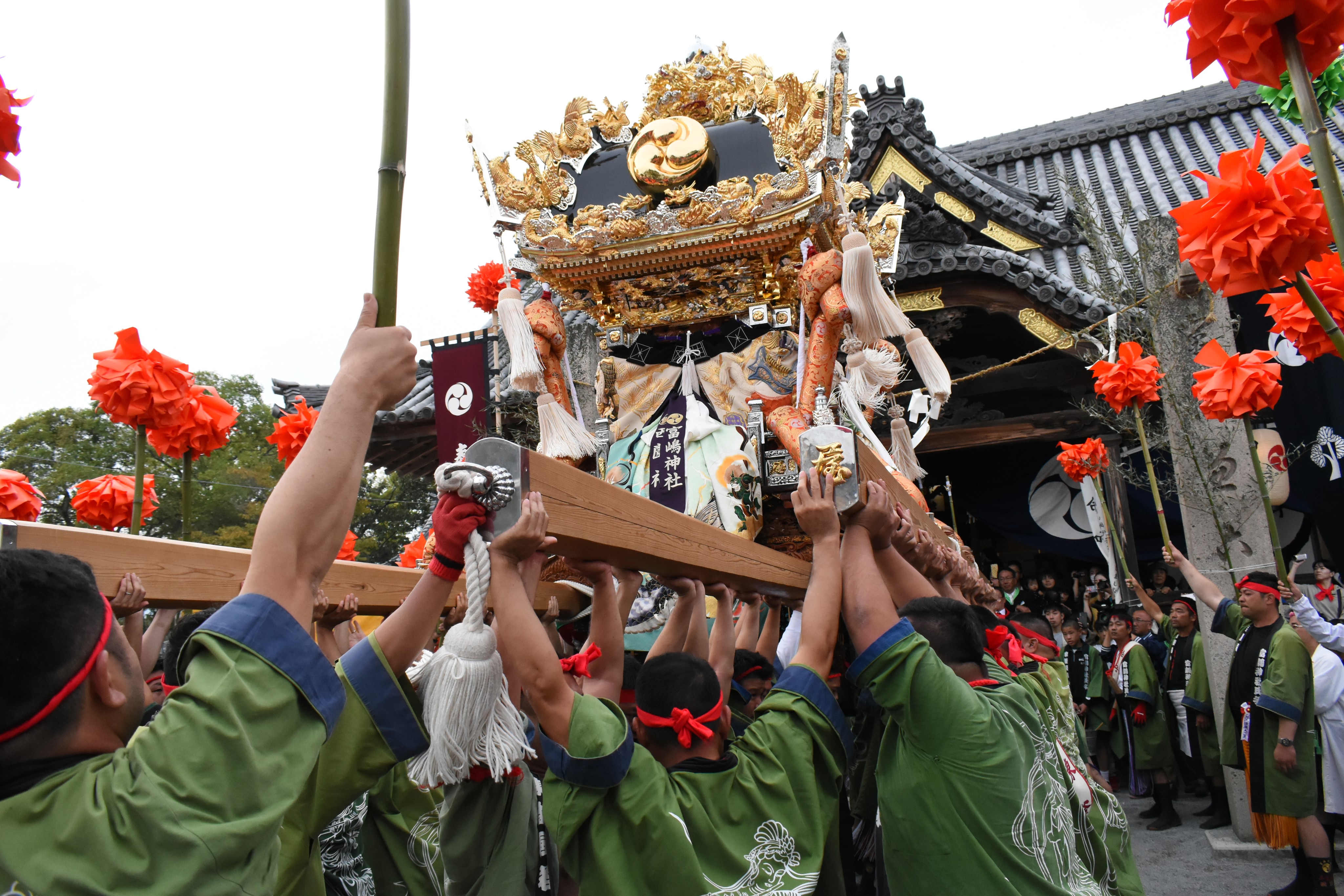 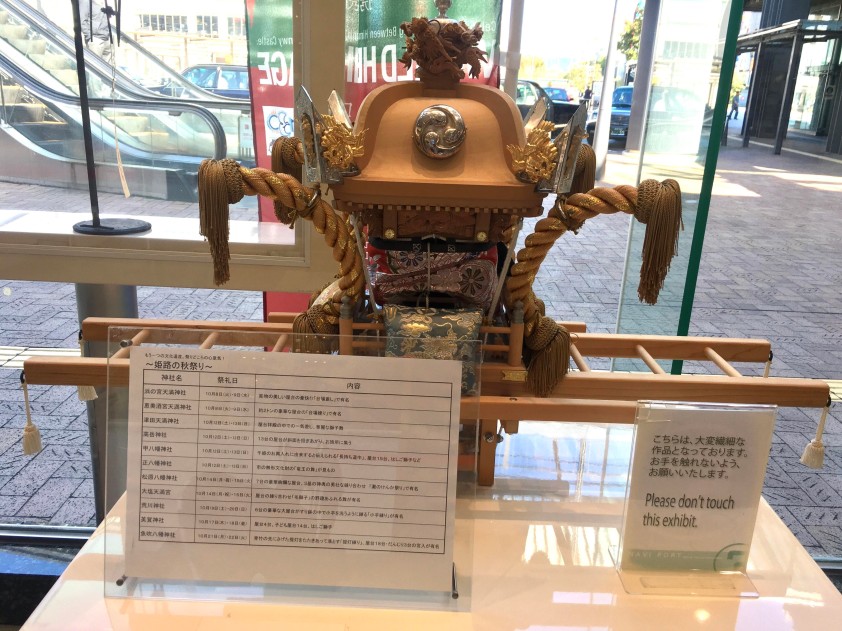 Niki, the name we finally gave younger daughter, is not an abbreviation; it was a compromise I reached with her father. For paradoxically it was he who wanted to give her a Japanese name, and I— perhaps out of some selfish desire not to be reminded of the past—insisted on an English one. He finally agreed to Niki, thinking it had some vague echo of the East about it.

from Kazuo Ishiguro “A Pale View of Hills” 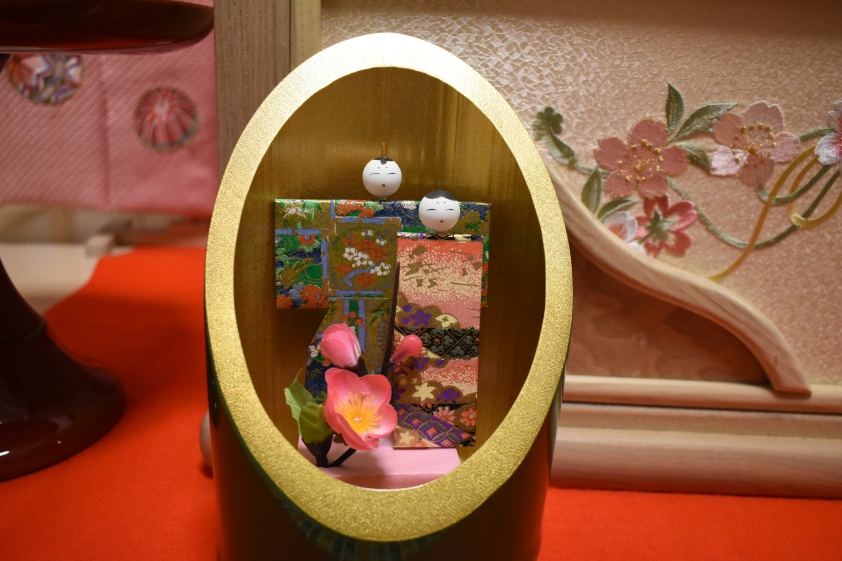 ‘I have learnt many things over these past years.  I have learnt much in contemplating the world of pleasure, and recognising its fragile beauty.  But I now feel it is time for me to progress to other things.  Sensei, it is my belief that in such troubled times as these, artists must learn to value something more tangible than those pleasurable things that disappear with the morning light.  It is not necessary that artists always occupy a decadent and enclosed world.  My conscience, Sensei, tells me I cannot remain forever an artist of the floating world.’

from Kazuo Ishiguro “An Artist of the Floating World” 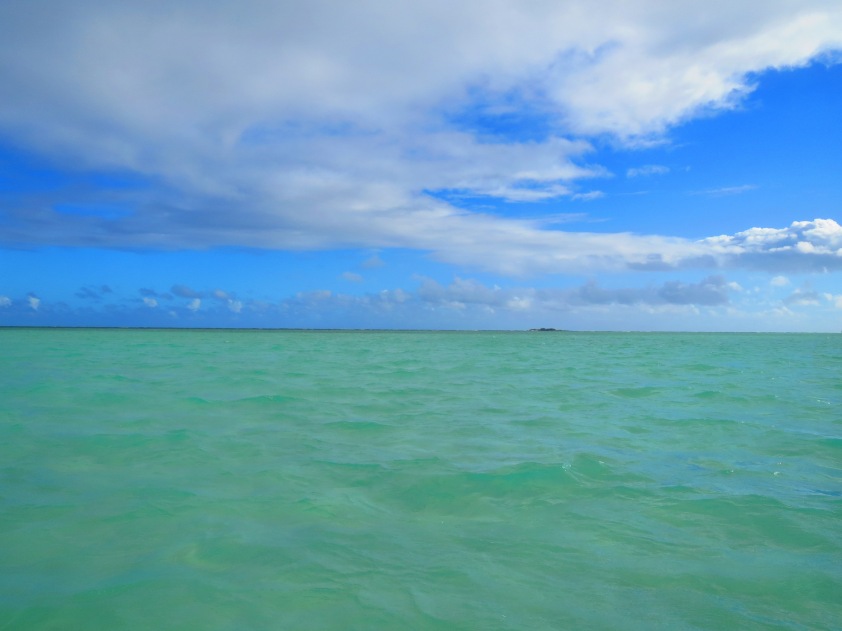 The tea ceremony also provides an opportunity to practice being in accord with nature and to feel a harmony with the seasons. A love of nature, the ancients believed, is the basis for awakening an appreciation of beauty and, therefore, of art.

from Laura Martin “Tea: The Drink That Changed the World”

It all struck me as very odd. But my intention in visiting him was not to study or analyze Sensei, so I let it pass. In retrospect, I particularly treasure my memory of that response to Sensei. Because of it, I think, I was able to achieve the real human intimacy with him that I later did. If I had chosen to turn the cool and analytical eye of curiosity on Sensei’s heart, it would inexorably have snapped the bond of sympathy between us. At the time, of course, I was too young to be aware of any of this. Perhaps that is precisely where its true value lies. If I had made the mistake of responding less than guilelessly, who knows what might have befallen our friendship? I shudder to think of it. The scrutiny of an analytical eye was something Sensei always particularly dreaded. 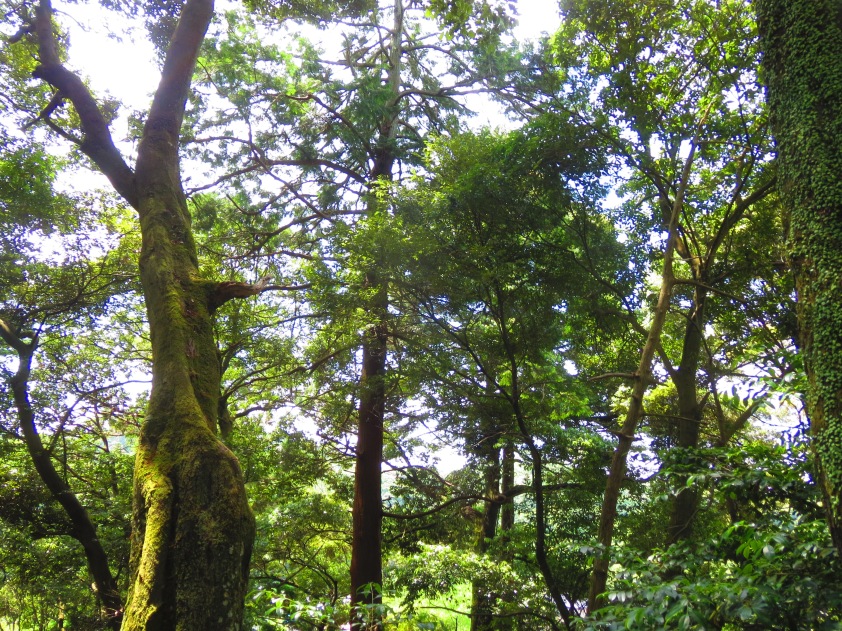 “So after he died, I didn’t know what it meant to love another person.”
She reached for her wineglass on the table but only managed to knock it over, spilling wine on the carpet. I crouched down and retrived the glass, setting it on the table. Did she want to drink some more? I asked. Naoko remained silent for a while., then suddenly burst into tears, trembling all over. Slumping forward, she same suffocating violence as she had that night with me.

I won’t say my emotions had settled themselves by the time the train pulled into Kyoto Station early the following morning. After all, when a stone is dropped into a pond, the water continues quivering even after the stone has sunk to the bottom. But when I descended the wooden stairs carrying us from the platform, with Mr. Itchoda one step behind me, I came upon such a shock that for a time I forgot everything else.

from Arthur Golden “Memoirs of a Geisha”